Minister of National Education Mahmut Özer continues to visit cities across the country as a part of the 2022-2023 school year preparation meetings. He held the first meeting in İstanbul only a week after the end of last school year. Özer attended the 7th of these meetings in Van.
﻿ 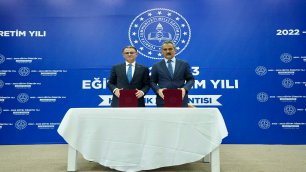 Following his meetings with formal school principals in İstanbul, Ankara, İzmir, Erzurum, Uşak and Sakarya as a part of new school year preparations, Minister of National Education Mahmut Özer had a meeting with school principals in Van.
Özer stated that they have increased the education investment budget of Van to 2,5 billion liras.
Addressing school principals, Minister of National Education Mahmut Özer noted that Türkiye managed the Covid-19 process successfully and thanked them for their contributions in adamantly continuing face-to-face education without any interruption.
Özer noted that in addition to give education to children, schools play an important role in increasing the quality of human resources adding that socioeconomically disadvantaged families paid the highest price in terms of learning loss and schools also play a major role in overcoming inequalities in the society.
Minister Özer stressed that important investments were made in education in the last 20 years in an effort to maintain equal opportunity in education and schooling rate among female students have exceeded the number of male students in higher education since 2014.
Reminding that steps like lifting coefficient practice and headscarf ban in education were taken in the last 20 year in order to democratize the education system, Minister Özer noted that these practices alienated academically successful students from vocational education in the past.
Özer stated dormitories, scholarships, free meals and free supplementary textbooks were among the crucial steps taken in order to provide equal opportunity in education adding that Türkiye achieved to improve the quality of education despite its increasing number of students.
Stressing that Türkiye has been improving its grades in the international student success surveys such as PISA and TIMSS, Minister Özer education system of the country which has 18,9 million students and 1,2 million teachers has achieved quality based growth.
Minister Özer thanked President Recep Tayyip Erdoğan, the architect of this success story during his speech at the meeting held in Van.
Noting that they had been working in an effort to maintain equal opportunity in education and increase preschool schooling rates, Özer went on to say that "On August 6, 2021, schooling rate among 3 year old children was 14 percent; it was 35 percent among 4 year old children and 78 percent among 5 year old children. Our goal was to increase the schooling rate among 3 year old children from 14 percent to 50 percent, among 4 year old children from 35 percent to 70 percent and among 5 year old children from 78 percent to 100 percent. Within this framework, we have decided to open 3,000 new kindergartens and 40,000 preschool classes. Within 10 months, we opened 1,100 kindergartens and 500 thousand children started kindergarten for the first time. During this period, the schooling rate among 5 year old children increased from 78 percent to 93 percent."
Noting that his Ministry will easily achieve its goal to increase the schooling rate of 5 year old children to 100 percent until the end of this year, Özer stated that they will open 101 new kindergartens in Van this year within this framework.
Concerning vocational education, Özer said that academically successful students are now enrolling in vocational education institutions and students are getting a share from the production income of vocational high schools.
Minister Özer reminded that vocational high schools made an important contribution to respond to the demand for products during the pandemic by producing masks, disinfectants, ventilators, mask machines and disposable overalls.
Meanwhile, Özer stressed that amendment in the Vocational Education Law No. 3308 turned vocational education to an attractive mechanism for both students and employers. The Ministry also gives high school diplomas to the graduates of vocational education centers. After these developments, the number of apprentices and foremen which was 159,000 on December 25, 2021 currently reached 600,888. 9th, 10th and 11th grade students are receiving 30 percent of minimum wage as monthly salary while 12th grade students' monthly salary is equal to 50 percent of minimum wage. Students are also insured against occupational illnesses and accidents.
Minister Özer also mentioned professional and personal development training programs organized by his Ministry for teachers. Budget allocated for teacher training programs was 8,9 million liras in 2021 and this budget was increased to 292 million liras in 2022. The Ministry has adapted the school based training program model. Minister Özer said that the training program per teacher was 44 hours before and this figure reached 94 hours recently.
Özer stated that the Ministry has been organizing Culture, History and Civilization Seminars for school principals. He also made statements about the teaching career steps system and stressed that the Ministry has no intention to force teachers to take tests for expert and head teaching positions.
After the meeting, the Ministry and Van Metropolitan Municipality signed a cooperation protocol concerning giving a monthly 300 lira scholarship to vocational education center students.

MEB, MINISTRY OF INTERIOR AFFAIRS AND TRT SIGN PROTOCOL FOR THE DEVELOPMENT OF TRAFFIC AWARENESS AMONG STUDENTS

The Ministry of National Education, Ministry of Interior Affairs and TRT have signed the "Cooperation Protocol for the Development of [...]

According to the Climate Change Action Plan of the Ministry of National Education, education programs will be updated in order to provide [...]

Minister of National Education Mahmut Özer attended a workshop based on violence and ways of showing violence in the media participated by [...]

Climate Change Action Plan was launched during a meeting organized in the Head Board of Education and Morality Conference Hall with the [...]