Our Minister Mahmut Özer attended the Ankara Sof Workshop which was organized in order to promote famous "sof" fabric produced from the wool of Angora goat as an original textile product and to remind its commercial, economic, agricultural and sociological importance.
﻿ 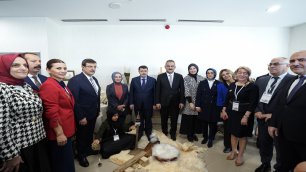 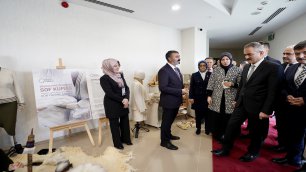 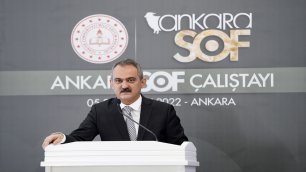 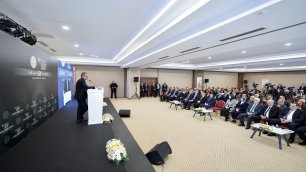 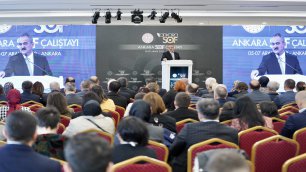 The Ankara Sof Workshop opening ceremony was held with the participation of Minister of National Education Mahmut Özer at the Mogan Vocational and Technical Anatolia High School Practice Hotel. Özer said during his speech at the ceremony that his Ministry exceeded all of its goals set for 2022.
Noting that the first goal of the Ministry was to inaugurate 3 thousand new kindergartens, Özer said, "Our target was to reach the OECD average in preschool education schooling rates because the main principle of maintaining equal opportunity in education is the preschool education. As of today, we increased the kindergarten capacity to 5,541. I believe that this capacity will exceed 6 thousand until the end of this year and I consider this as a revolution."
Goals set for 2022 exceeded
Reminding that the schooling rate of five year old children increased from 65 percent to 98 percent within a year and this figure will probably reach 100 percent until the end this year, Özer noted that another goal of his Ministry was about vocational education centers.
"After the amendment in the vocational education law on December 25, 2021, President Erdoğan announced that the goal was to enroll one million apprentices and foremen in public education centers. Number of apprentices and foremen in the country was 159 thousand then. As of today, this figure reached 1 million and 110 thousand. We have exceeded our goal before the end of 2022. We also carried out a campaign about supplementary sources. As our President announced earlier, we will distribute 100 million supplementary sources to children enrolled in all levels of education in the 2022-2023 school year. We already distributed 160 million supplementary sources to students and exceeded our goal by fifty percent. We prepared the 'No More Schools Without Libraries' project with the support of Emine Erdoğan and founded libraries in all schools in 2021 but we set another goal to increase the number of books at school libraries from 28 million books to 100 million books in 2022. As of today, the number of books reached 105 million."
Multi-dimensional support to the development training programs for teachers
Minister Özer mentioned the goals of his Ministry about teachers. Özer said that the Ministry activated different mechanisms in order to provide multi-dimensional support to the development training programs for teachers.
"Our goal for 2022 is to increase the training program per teacher to 120 hours and as of today, this figure reached 205 hours and probably exceed 250 hours until the end of this year," said Özer.
Another goal of the Ministry is to increase the capacity of lifelong learning.
Özer went on to say that: "Generally, three or four million people are enrolled in training courses organized in public education centers and advanced technical schools for girls every year. We set a goal to reach 1 million people every month and finally reach 12 million people by the end of the year. As of today, 12 million 242 thousand and 46 people attended the course programs and 65 percent of these people are women."
3 new goals about lifelong learning
Minister Özer shared the new three goals set by the Directorate General for Lifelong Learning during his speech at the ceremony.
"First of all, we will update existing more than 3,500 course programs organized by the Directorate General for Lifelong Learning by considering the views of academicians and experts and in line with the demands of the labor market. Our second goal is to load all course programs to the digital platform. All education contents will be opened to the use of people in the Public Education Center Information Network (HEMBA) until the end of 2022. Third goal is to reach international level in public education. All course programs in the digital platform will be opened to all of our people living in the Balkans and continental Europe on January 1, 2023," said Özer.
Özer stressed that the new approach of his Ministry is not only based on human resources and blending vocational education with labor market but also dissemination of intellectual property rights.
Özer went on to say that: "Like we did about 'şal şepik' fabric of Şırnak, we will develop fabric production with an innovative approach and do everything in our power to export it to other countries. We have founded village public centers within this framework."
The Ministry of National Education founded public education centers in every village school in order to give training programs about many skills varying from agriculture to husbandry to all people living in villages.
Özer said, "Till now, 147 thousand people attended training programs organized in 2,000 village public centers. Our goal is to found a center at a village public center and produce Angora goats. We will also draw the attention of people to the fabric workshops which will be established in public education centers."

Minister of National Education Mahmut Özer and MEB unit chiefs convened to start the work on the issues, discussed during the visit to the [...]

Minister of National Education Mahmut Özer met with the Parliamentary Speaker of TRNC Zorlu Töre as part of his official visit in the [...]

Minister of National Education Mahmut Özer, who went to the Turkish Republic of Northern Cyprus to make official contacts, met with the [...]