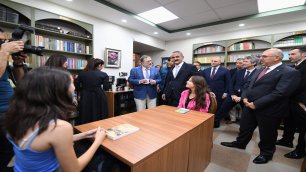 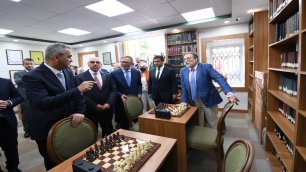 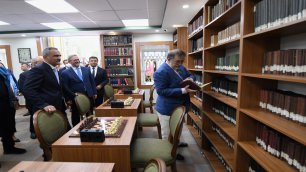 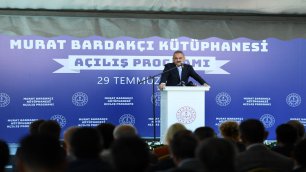 Expressing his happiness to name the library of Beşiktaş Anatolia High School after historian Murat Bardakçı, Minister of National Education Mahmut Özer stated that massification of education in Türkiye was achieved in the last 20 years and schooling rate in all levels of education varying from preschool to higher education exceeded 90 percent for the first time during this period.
Özer stressed that antidemocratic practices in the education system such as headscarf ban and coefficient practice were eliminated during the last 20 years in line with the social demand adding that the Ministry of National Education provided accession to education to children in all parts of the country without making any discrimination between regions during the same period.
"Recently, we had a one hour long meeting with the OECD General Secretary during the UNESCO Ministers' Summit in Paris. I felt proud and happy to hear Türkiye's success story in education from him and exchange views. Later, he issued a social media message saying that, "Türkiye achieved important developments in education in the last 20 years and this should be an inspiration to other countries in the region," he noted.
Concerning some circles who made negative comments about LGS placements, Özer said that these people do not have slightest knowledge about education and people in the country easily made comments that are not based on scientific data.
Özer noted that Türkiye has been writing a success story in the last twenty years adding that, "We are constructing a new language that belongs to this soil, culture and civilization. It is obvious that people who do not live and grow with this language could not understand and empathize with this effort.  But we will continue to walk on this path and enjoy working in order to serve the beautiful people of our country. I would like to thank President Recep Tayyip Erdoğan for his support of education and his leadership."
Minister Özer said that the goal of his Ministry is to maintain constant improvement in the quality of schools and reinforce equal opportunity in education and went on to say that: "We have defined three priorities namely increasing schooling rates in preschool education, reinforcing vocational education and supporting personal development programs for teachers.  As a result, we aim at minimizing opportunity differences among schools at every part of our country. In other words, we will reinforce equal opportunities in education. Without considering socioeconomic backgrounds, we will associate every child to the schools where they can get the best education."
Özer also mentioned about 10,000 Schools in the Basic Education Project and said that the Ministry has allocated budgets to schools as a part of preparations for 2022-2023 school year. He stressed that the Ministry has the means and power to respond to all needs of schools varying from cleaning materials to stationary, from minor repairs to reinforcement projects.
Özer reminded that the Ministry initiated the "No More Schools without Libraries" campaign under the auspices of President Erdoğan's spouse Emine Erdoğan on October 26, 2022 in order to encourage students to be involved in cultural and artistic activities.
"There are 57 thousand 108 schools in our education system and we have inaugurated 16 thousand and 361 libraries within two months. In other words, we opened 272 libraries every day. As of the end of 2021, there are no more schools without libraries in our education system. That was not all, we also increased the number of books in school libraries. On October 26, 2021, the number of books at school libraries was 28 million and book per student figure was 1,3. Today, there are 70 million books in school libraries and we will increase this figure to 100 until the end of this year," stated Özer.
Minister Özer expressed his happiness to see the outcome of this campaign and added that his Ministry is working in an effort to make reforms and improve its means.
Stating that the Ministry has been naming newly opened libraries after scientists and intellectuals of the country, Özer said, "We would like them to visit schools once a month and chat with students. Previously, we named libraries after Doğan Hızlan, Alev Alatlı, İhsan Fazlıoğlu and İlber Ortaylı."

Minister of National Education Mahmut Özer continues to visit cities across the country as a part of the 2022-2023 school year preparation [...]

Minister of National Education Mahmut Özer and Minister of Industry and Technology Mustafa Varank attended the award ceremony of the 1st [...]

The Ministry of National Education opened summer schools for students for the first time in its history. 1 million students enrolled in [...]

The Family School Project was launched during a ceremony participated by President Recep Tayyip Erdoğan's spouse Emine Erdoğan and [...]